This blog seems mostly to be my own notebook. Few have found it on the net even though I often have referred to it to my friends. Happy you!

Eventually, I reached my goal The Mediterranean in Greece. Not really the way I wished it to be reached. But given the circumstances I am very pleased with my final leg of walking because my son Johan went along, leaving his busy life in London. We flew both to Sofia. I came before him enjoying the city a couple of warm and sunny late October days strolling the downtown streets.

Upon Johan's arrival and a late meal in the busy Vitosha avenue, early the following morning we entered a small bus for four hours ride down to Gotse Deltjev close to the Greek border. That was what we had paid for but we wanted to go further, at least to the border but even more so to Nevrokopi. Now we needed to find some place to eat. Rather nice village with new houses and shops. And fancy cars. Probably young people work elsewhere in the EU or doing some cross-border business with Bulgaria. We had a pizza and soon after started our walking. Was it ever hot on the bitumen road.Some 5 k and we reach a small village, Ochiro. It turned out to be a (former?) center of the Greek defense line of Metaxas. The area was historically a mess of Ottomanian power and emerging Balkan states, Greek being the first in 1830 ending not until 1947. See map below.

Now, we had forgotten to buy food for the evening and also food for next day's breakfast but walked steady on and up into the chilling forest, literally on the defense construction. Finally, we stopped for the day at around 6 p.m. on the northen slopes with a lovely views, soon darkness except for some village light across the valley. Tent. Sleeping bags. Very tight. Good sleep. Early morning. No breakfast. Packing. Started walking before 8 a.m. To be cont'd. 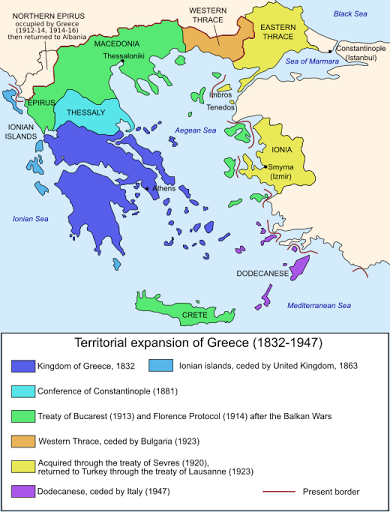 5 May. At last. I am at the foot of the western Rodopi mountains and tomorrow
morning the walking starts from the village of Debrsjtitsa. Today in the mid-
sized town of Pazardzijk the cherries are almost red and in the bazaar (Pazar!)
there was an abundance of locally grown strawberries

Skicka med e-postBlogThis!Dela på TwitterDela på FacebookDela på Pinterest
31 December 2018.
This year, the fifth of my walking from Sweden to Greece, ends in  ...Australia. Our daughter Elin gave birth to Althea on 6 May and we are on a visit, my wife and I. Because of a mishap, I could not go as planned to Bulgaria again for the fourteenth stretch of my walking.


Here in the Sydney-Parramatta area the temperature of my last two walks in southern Romania and northern Bulgaria at +27-28°C is outnumbered by ten degrees. Today +37°C and tomorrow +38°C. So walking here is tricky. Firstly, Sydney is growing and growing fast (2013 by 467 000 inhabitants). But the area is, nevertheless, spaced with nature reserves and various bushwalks along the creeks.
Upplagd av Lave kl. 08:55 Inga kommentarer: 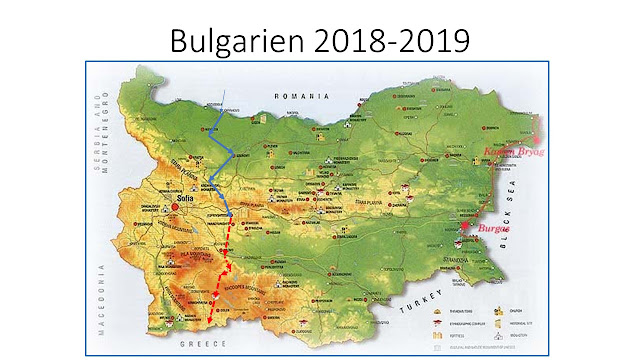 Blue mark = My way in April from the ferry Orjachovo to Lukovit, Zlatna Panega (Chuchi Guest House), Etropol, Pirdop and Panagyurishte.
Red mark = My planned route through the south of Bulgaria from Panagyurishte to the Greek border.

Today, I realise two things.
- Listening to radio and Jonas, a young man who broke his neck the night his friends had prepared his stagparty including somne sort of judo isntruction that went terribly wrong.
I realise that I am a fortunate kid who still can stand and walk, and walk long distances, day after day.
- Painting my way through Bulgaria I realise that I am way behind with my blog. Sorry for you who may visit my site. But hopefully, I will catch up including some pics and stories.
This summer has been and is still extremely warm but I can tell you that my walk through Romanian Valchia last October was indeed a hot experience. +27-28° C under sunshine from a blue sky every day. The same weather followed me last April, when I crossed the Danube and walked in northern Bulgaria to the town of Panagyurishte. +27-28° C again under a burning sky.
So, some of the miles I had to "walk" by bus or accept invitation from locals (pic) to go by car. 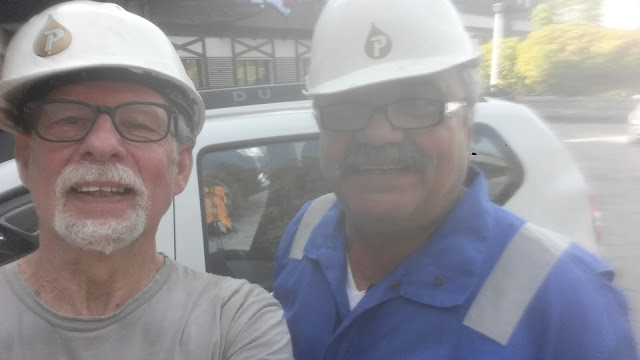 2 April 2018.
Again, I have booked my flight to Cluj for another leg of walking towards Greece. 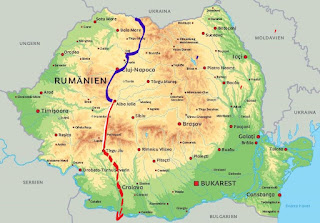 Having returned from the Danube northern shores in full summer temperature (+27o C) at the end of October last year, I will take the bus from Cluj back to Bechet, where there is a ferry to cross the mighty river in the morning of 19 April. 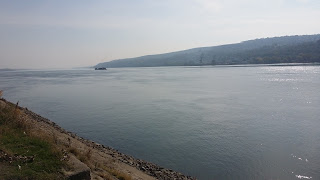 Oryahovo will be the starting point on the southern shores. Probably, I will hitchhike up the steep hills and a bit onto the road to Knezja, a village where I hope to find accommodation. We are now in Bulgaria. Wow!

17 Oct 2017. Once again I landed in Cluj Napoca. Very foggy and clouds but by noon the sky came clear. Wonderful colours in the woods, I met more neutral brownish in the hilly grasslands heading south via Alba Iulia and across the Carpathian mountains (again). Last May, Staffan G and I struggled down a 1,5 m snowy ravine from 1800 m asl.
Upplagd av Lave kl. 04:51 Inga kommentarer: